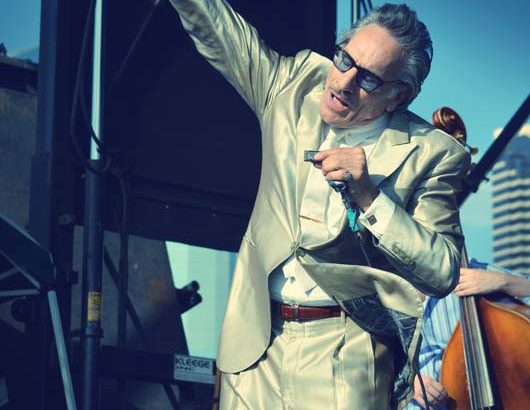 The Philadelphia Inquirer has called harmonicist and songwriter Rick Estrin “one of the great characters in blues – a sharp-dressing, smooth-talking harmonica-playing hep-cat,” who is also “a deceptively subtle writer who can cloak pointed or sobering messages within the band’s good-time vibe.” In 2008, Estrin teamed up with guitarist Chris “Kid” Andersen, drummer/vocalist J. Hansen and multi-faceted instrumentalist Lorenzo Farrell to form The Nightcats. Since then, Estrin and his ensemble have been delighting audiences and critics alike with their fresh and modern original blues injected with a solid dose of gritty roadhouse rock n’ roll. Blues Revue magazine has called The Nightcats “one of modern blues’ most versatile bands,” and Living Blues says “Estrin’s harp work is masterful” and their music is “intelligently conceived and executed and hugely entertaining.” Estrin won the 2013 Blues Music Award for Best Instrumentalist–Harmonica–and, in 1994, won the Blues Music Award for Song Of The Year for his composition “My Next Ex-Wife.” Since their inception in 2008, The Nightcats have quickly become a favorite at major blues festivals around the world, including the Lucerne Blues Festival in Switzerland, the Caxias de Soul Festival in Brazil, and the Moulon Blues Festival in the Netherlands. In the United States they’ve played the North Atlantic Blues Festival, the Magic City Blues Festival and the Bayfront Blues Festival. Estrin also performed at the Chicago Blues Festival in 2011 as part of Alligator Records’ 40th anniversary concert. www.rickestrin.com